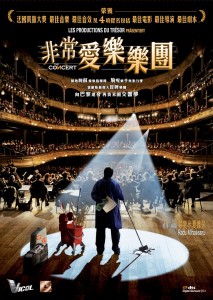 Thirty years ago, Andrei Filipov was the conductor of the illustrious Bolshoi orchestra until he was fired for using Jewish musicians. Now he works as a janitor and drinks too much. But when he intercepts an invitation for the Bolshoi to perform in Paris, Andrei masterminds a plan to gather his own Bolshoi to go in their place in order to make a triumphant return to the music scene. With a motley bunch of former musicians at his side, Andrei sets off for Paris to fulfill his destiny and return to his glory as a great conductor. Along the way, he will reunite with a young, beautiful violin virtuoso who holds the key to his past and to his future.