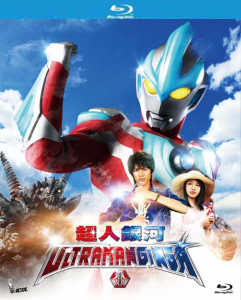 1 – A Town of Falling Stars
High school student Hikaru Raido returns to his hometown after seven years of adventures overseas and encounters a mysterious doll of Ultraman Taro who can talk. Guided by fate, Hikaru becomes the gigantic hero Ultraman Ginga to fight evil forces !

2 – A Midsummer Night’s Dream
Hikaru shares his secret with Misuzu, his childhood friend of being Ultraman Ginga. However, the evil monster Kemur now sets his eyes on Misuzu. Can Hikaru keep the girl from being harmed?

3 – The Twin-headed Flame Beast
The Furuhoshi Primary School, now closed for function, still means a lot to Hikaru and his pals who cherish their childhood memories. Now the school is being attacked with flames by the evil two-headed monster King Pandon. Ultraman Ginga engages the monster with his new fighting technique !

4 – The Idol is Ragon
Misuzu is selected to replace a model who cancels the photo session at last minute. With no experience she tries her best to do her job in front of the camera. Meanwhile, her friend Chigusa secretly longs for becoming idol, while Kenta wants to be a cameraman. Everything is turned upside down when the deep sea alien Ragon shows up to shatter everybody’s dream.

5 – The Hater of Dreams
Hikaru talks to Misuzu and Chigusa about the time limit Ginga has while he and Ginga are fused into one. This is witnessed by Kenta who mistakes this as a sign of him being isolated. Catching Kenta’s anger alien Valki sees this as a chance and sets out his evil plans.

6 – The Battle of Dreams
The mysterious robot Jean-Killer and the new transfer student Ichijouji who controls the gigantic robot. Who are they? And who is Tiga Dark, the giant who emerges from the dark and now stands between Jean-Killer and Ginga?? Here begins the dream battle.