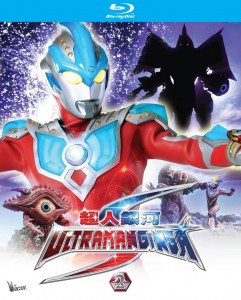 The Alien Chibull, Exceller, unleashes the super monster Vakishim and the Dimensional Superhuman Yapool! Yapool possesses UPG Officer Gouki to infiltrate the base, in order to trap Hikaru/Ginga inside a dimensional barrier! His next target is Sho/Victory. As Vakishim and Victory engage in an intense battle, can Gouki resist Yapool’s possession for long enough!?

Sho/Victory are being followed by a mysterious woman named Hiyori, who has some kind of grudge against his race, the Victorians. As Sho is attacked without knowing the reason why, his transformation item, the Ultlance is taken! Hiyori lives with Gomora and goes on a rampage. Ginga tries to stop her, but Shepardon tries to protect Gomora. And then the ancient monster, Fire Golza appears. How will Sho deal with this four sided melee?!

The crystal on the back of the Sacred Beast Shephardon holds an enormous amount of the Victorium that the Alien Chibull, Exceller, has been seeking. Realizing this, Exceller sends the Odd Beast Gan Q to suck Victory up, causing Shepardon to give chase! UPG gathers under Captain Jinno to stop Exceller’s scheme!

Five vicious monsters are combined to create the unstoppable Five King! Ginga and Victory’s unrelenting assault seems to have no effect, and the two Ultramen vanish in a flash of light! On the verge of victory, the Alien Chibull, Exceller, activates Android One-Zero’s self destruct countdown, and sends her into UPG’s base! Unable to transform, can Hikaru, Sho, and UPG stop the countdown to destruction!?