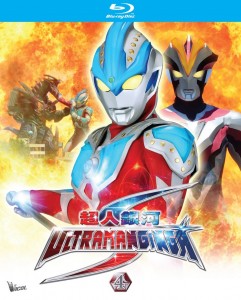 Secretary Kamiyama has absolute authority over UPG arrives at the base. To strengthen their defensive abilities, a project that had been proceeding in secret will now be fully implemented. Hikaru is taken into custody after objecting to the plan, and the other officers are all barred from duty except Arisa. As Birdon appears, a forbidden door deep within base is about to be opened…

The Victorium Canon that was secretly constructed at UPG base is proven to be incredibly powerful. Furious at seeing the source of life for the Victorians, and all life on Earth, used this way, Sho leaves Hikaru behind and makes his way into UPG base. When Hyper Zetton shows up, Secretary Kamiyama’s command room gives the order for the secret weapon to once again be deployed. What will Arisa do when she is asked to fire…?

Hikaru/Ginga’s nemesis, Dark Lugiel, fuses with UPG’s base, creating Vict Lugiel. With such a powerful foe at Exceller’s command, Ginga and Victory are powerless to stop him. With hope on the verge of vanishing, UPG still remains committed to the fight. Seeing them struggle, Mana questions the meaning of life. Though she was created as an android, she decides to consider her own “life” for the first time.

The final episode of Ultraman Ginga S! Mana’s sacrifice brings a faint hope to Hikaru and the others. As Ginga and Victory struggle, Exceller falls to the side as their true foe appears, and causes them to lose their Ultraman powers… but the people still have hope. All of Hikaru’s friends gather for the final battle, with the fate of the human race on the line!