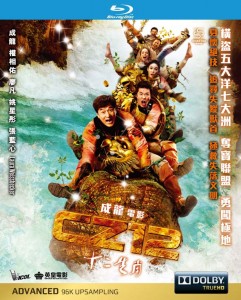 Having disappeared for over a century, several of the bronze sculptures depicting the heads of the twelve animals of the Chinese Zodiac have begun to surface one by one. The auctions prices for them skyrocket, but the rest of the heads are nowhere to be found. JC and his team are hired to find them. He pretends to join a relic conservation organization in Paris to get information on the whereabouts of the bronze heads from Chinese student Coco. He works with his team, consisting of Simon, tech expert David and long-legged special agent Bonnie to sneak into an old French castle to steal several of the heads and successfully evade capture. He also finds out from the heir to the castle Katherine that when one of her ancestors was in the military he suffered a shipwreck with several of the bronze heads on board his ship. He had never been heard from since, and it is believed that those bronze heads are at the bottom of the ocean. The six of them find the mysterious island where the ship had run aground. Some of the team set off a secret mechanism and they fall down deep chasm in the earth…. Everyone survives; JC finds the bronze heads as well as a stash of gold. When they get ready to leave, however, a band of pirates attacks them. And a spectacular battle erupts, virtually from the center of the earth!