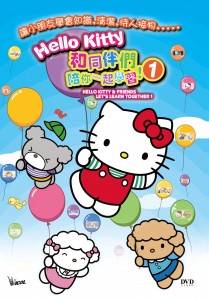 #1 Let’s Find Somewhere Safe to Places
AMY and ERIC are KITTY’s new neighbors. Soon, they become friends and play together in town. AMY and ERIC are playing hide-and-seek on the way….

#2 Let’s Help Mother Out
AMY and ERIC often see that their mother is very busy. Therefore, they ask KITTY if there is any way to help their mother. So, what do they do to help her?

#3 Let’s Tidy Up Toys
AMY and ERIC are playing toys with their friend, Harry. Then they go to eat apple pie together without tidying up the toys first. So, KITTY teaches them the importance of tidying up toys.

#4 Let’s learn about time?
When KITTY and friends are playing in the park, they find that a clock fairy fell into the grass. They save the fairy.  Fairy thanks and teaches them how to tell time!

#5 Let’s Be Friends Again
ERIC is mad because HARRY didn’t want to play swing with him. HARRY is also angry at ERIC, as ERIC scolded him. The two ignore each other. Can ERIC and HARRY be friends again?

#6 Let’s Find Big and Small Animals
KITTY’s dad brings AMY and ERIC to the zoo. They see many different kinds of animals. Besides, there are other kinds of animals outside the zoo…

#8 Let’s Get Ready for Bed
AMY, ERIC and HARRY are sleeping over at KITTY’s house. After playing, they start to change their pajamas and brush their teeth. But HARRY says no…

#9 Let’s Weigh Objects
KITTY and friends go to the park. ERIC and HARRY are playing on the seesaw. AMY sits behind ERIC, and they found something fun. Let us find out the mystery of weigh!

#10 Let’s Play Origami
AMY wins the lucky draw and gets an “origami set” as a prize. But AMY, ERIC and HARRY don’t know how to play origami. So , KITTY teaches them the joy of origami!

HARRY sticks a hat on the slide. AMY and ERIC are both surprised. KITTY says that there are many things in the world that can be stuck together, let’s discover together!